I’ve been intrigued by Villar since the beginning. As a baseball fan and a fantasy owner, how can you not be? He’s a speedy shortstop with power, and the lure of a 20/20 season is in his profile.

Today I’m going to take a hard look at one of fantasy’s most frustrating players, diving into what made his 2016 so successful, what changed in 2017, and what his outlook is for this year and beyond.

The Curious Case of Jonathan Villar

In fairness to Villar, he missed some time on the DL last season, and only played in 122 games in 2017 compared to 156 in 2016. Still, owners were stung hard by the regression bee (that’s a thing, right?), and the fact that he hasn’t been forgiven for that pain is evident in his current ADP, as he’s going in the 20th round in most drafts, and a shockingly bad ADP of 244 on ESPN.

Let’s start by evaluating what Villar did well in his breakout season. We know the surface stats are good: he came within one measly HR of a 20/60 season, combined for more than 150 R+RBI despite playing on a pathetic Brewers offense that finished 25th of 30 in R scored, and had an excellent slashline of .285/.367/.457. Villar achieved these stats through his approach at the plate (duh), which allowed him to hit for high AVG, take a healthy number of walks for an elite OBP, and thus steal tons of bases and score plenty of runs.

Villar’s BB-rate was a personal MLB-best for him at 11.6%, though he showed flashes of such plate discipline in the minors by recording a 13.8% BB-rate in 51 games of AAA-ball in 2014, as well as marks of 12.1%, 11.7%, and 11.8% in shortened seasons at three other levels. He paired that with a mediocre (though below his career-average) 25% K-rate, but that’s livable for a young player and anyone who gets on base and produces.

Villar also recorded a career-high Hard Hit Percentage of 35.1% with a very low Soft Contact of 20%, and he saw his HR/FB rate jump to 19% after never eclipsing 16.2% in the minors. Additionally, he Pulled the ball less than at any other point in his career while hitting to Center more than any other season, distributing the ball more evenly along with his other peripheral gains.

Mostly, Villar’s 2016 success was about his disciplined approach at the plate. Villar swung at less baseballs in general, being more picky with what he tried to hit: his O-swing, Z-swing, and overall Swing Percentages were all lower than his career averages and represented several career-lows. He also set a personal best in Swinging Strike Percent with a rate of 10.8 whiffs per 100 swings. He wasn’t posting elite contact stats, but he didn’t need to with his strength and speed: he was still getting on base and collecting hits to the tune of a .285/.367 AVG/OBP.

Additionally, Villar posted a 4.17 P/PA (pitches per plate appearance), meaning he saw an average of more than 4 pitches each time he stepped to the plate. For perspective, his mark of 4.17 was the 18th best in the MLB in 2016, above names like Harper, McCutchen (remember, this is 2016 Cutch), Blackmon, Arenado, Freeman, Correa, and Ortiz.

This more patient approach – swinging less often – led to him sitting back on fastballs and crushing them: per Fangraphs data, his wFB, which measures runs created above average on a fastball, was an excellent 10.1, which still represents his career-best for any pitch in any year’s Weighted Pitch Value.

In short, 2016 Villar employed a more measured, patient approach at the plate which allowed him to take more walks, see more pitches, and destroy fastballs en-route to an excellent all-around season.

Not as much as you might think, is the surprising answer. Yet his stats still nosedived.

Obviously the slashline and counting stats dropped with those figures, but the peripherals show us how it really happened.

So where do the differences come in to play? In his plate discipline, including one very odd and rarely-used stat that I think is quite telling (I’ll get to that in a second).

It’s werid to think this way in baseball, where the whole point of a hitter is to, well, hit, but Villar performed much better in 2016 when he swung at fewer pitches across the board. He was more selective on pitches both in and out of the strike zone, and he raised his Swinging Strike Percent, or whiff rate, by a full three points. Talk about flailing at the plate.

Diving deeper, we see how this affected his ability to get around on inside pitches. On the right is Villar’s 2016 AVG Exit Velocity on pitches in each part of the zone, with 2017’s on the left: 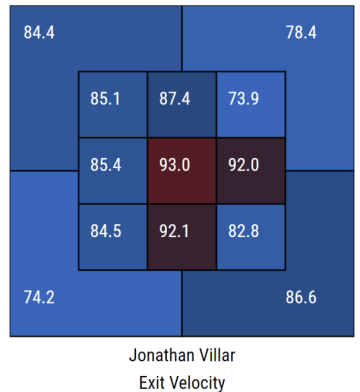 So in 2016 Villar hammered pitches on the inside of the plate. In 2017, not so much: his best swings last year came on the middle and outer half of the plate. This tells me that he’s swinging late due to not seeing pitches as well, which explains the nearly-cut-in-half BB-rate and his inability to make contact.

It also shows that when he did make contact, it wasn’t nearly as good: his barrel-rate dropped a full point from 4+% to 3% per StatCast, and he posted the second-worst BABIP of his career.

Now, about that odd, rarely-used stat I was talking about a moment ago: Pace. Pace measures the average amount of time between pitches seen by a batter. Now, obviously this stat depends on who’s pitching, game situation, and so on. But over the course of a full season it stabilizes to give us an idea of how much time the batter takes before he swings.

Villar has had five professional seasons, although the first three (2013-2015) were all truncated and between 50-85 games. However, his Pace has correlated strongly to his Batting Average over his career:

Simple enough trend: the longer Villar takes between pitches, the more he rushes, the worse his AVG ends up. The key here is that Pace is not the same as being selective in your pitches. You can be disciplined and patient in your approach while having a fast Pace and without ever stepping out of the batter’s box : those qualities are about how well a player sees the ball, how fast they react to pitches, and how comfortable they are in the box.

His 2017 diagnosis is simply that he rushed too much and was not comfortable at the plate, and his plate discipline and stats suffered accordingly.

Is it as slowing down his brain and speeding up his bat? I think it might be. And the good news is he appears to have figured it out, as he’s slashing .326/.383/.442 in Spring Training. He hasn’t hit a HR yet, but I chalk that up to lack of ABs: if he maintains the 19% HR/FB ratio that he carried in 2016 and 2017, he would be due for roughly one HR in 43 Spring ABs. So he’s only one dinger away from being right on track, and his encouraging slugging percentage is bolstered by 5 Spring doubles. Spring Training is far from ironclad proof of a rebound (or a regression), but Villar’s stats and plate approach is encouraging, especially his tasty 20.9% K-rate. He’s already showing the improvements in plate discipline we need to see, and those “improvements” are actually more like regressions to the mean: this is more in line with what his peripheral stats indicate his baseline should be, not last year’s bloated 30% K-rate and weak 6.9% BB-rate.

His BABIP, and thus AVG and OBP, should rise significantly as well. Villar averages a .343 BABIP across two full and three partial MLB seasons, and that .343 figure is heavily weighted down by his atrocious 2014 stat. To show the chart again:

Lastly, there’s the issue of playing time on a crowded Brewers roster, but even if he starts at the bottom of the lineup, Villar is simply too explosive to keep on the bench, and I expect him to either win the keystone outright or earn platoon splits out of the gate. If it’s the latter, Counsell has already shown willingness to shuffle the lineup and bat whoever is playing well at the top, and Villar can easily earn his way back to the leadoff spot if he doesn’t do it out of Spring Training.

These are indicators, not guarantees, but since his current ADP is 200 per FantasyPros, and 244 on ESPN, I think Villar is being undervalued and could surprise owners with a second breakout.

The scariest part of his game is that we haven’t seen the peak yet: he’s only 26 years old, and it’s easy to forget that this is just his third full MLB season, and he’s got more development to go. Getting around on pitches and improving how he hits inside fastballs is a necessity, but he is more than capable of doing it. When Villar is swinging less and moving faster through his ABs he is his best self, and he’s been showing that self in Spring Training this year. His Minor League and limited MLB stats all support that he’s much closer to the player we saw in 2016, not 2017. And while he may not give owners 2016 numbers, he will certainly deliver more value than an ADP of 200.

The base beer for this, Mocha Merlin, is one of my all-time favorite coffee beers, so I was excited to try this nitro variant.

As a nitro beer, which uses nitrogen gas instead of the naturally-occurring CO2 to carbonate the beer, Nitro Merlin was unsurprisingly smooth and creamy. It has the light, easy-going body that almost makes you forget it’s a stout, despite the thick foamy head atop a jet-black body.

Unfortunately much of the flavor seems to have been lost in translation in Mocha Merlin’s nitrogen-enriched cousin, and the coffee and chocolate flavors were light and bordering on non-existent. Still tasty and drinkable, with a rich, creamy body, but lacking the incredibly flavors and complexity of the base beer.

One thought on “Player Analysis: A Deep Dive into Jonathan Villar’s 2018 Outlook”